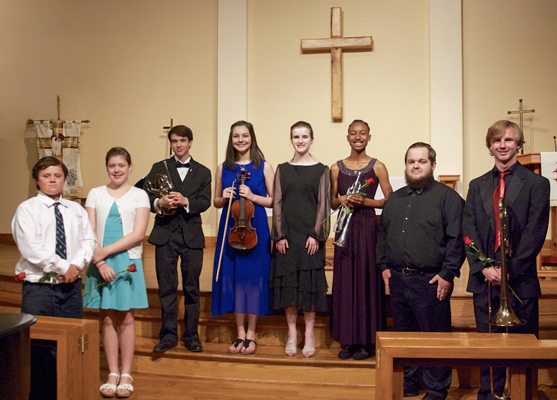 The Concert on the Green Concerto Competition in 2013 was entered by 17 very talented students of music in our county!! Five musicians from the senior division and two from the junior division competed in the finals on Monday, April 29, 2013.

The Competition awards monetary scholarships to most student finalists based on sponsorship and donor support each year. If a first-place winner is chosen in the music competition, that student also is awarded the opportunity to perform with the Jacksonville Symphony Orchestra. A student musician may only win the first place award in the senior division once; this student may not re-enter the competition in a future year. Up to two winning students may perform with the Symphony in a given year of the competition. This is due to the high cost to Concert on the Green, Inc. for symphony rehearsal-booking time, conductor payment, and cost of purchase of music for the symphony accompaniment parts for a full orchestra.

We value our carefully chosen, highly prestigious, and professional musician judges for the Concert on the Green competition. These judges are asked to make the determination of a student winner (first-place prize) based upon the quality of musicianship and technical ability of the student. The winning student(s) must be able to perform at a certain level to play with the renowned professional symphony orchestra. Up to two students may be awarded a first-place prize; if two students were chosen, one would be a vocalist and one an instrumentalist.

This year, the judges made the decision to award a second-place prize and a third-place prize in the Concerto Competition. Our two first-place winners from 2012 were chosen to perform in the May 26th Concert with the renowned Jacksonville Symphony Orchestra at Magnolia Point Golf and Country Club in Green Cove Springs. The festivities begin at 4 p.m. and many of the competition finalists will perform during the pre-concert entertainment.

The Concert on the Green Committee is thrilled by the opportunity this gives these maturing students to receive monetary awards in 2013 and to return to the competition in the years to come to audition again for the first-place scholarship opportunity to perform with the Jacksonville Symphony.

A COPY OF THE OFFICIAL REGISTRATION AND FINANCIAL INFORMATION MAY BE OBTAINED FROM THE DIVISION OF CONSUMER SERVICES BY CALLING TOLL-FREE WITHIN THE STATE. REGISTRATION DOES NOT IMPLY ENDORSEMENT, APPROVAL, OR RECOMMENDATION BY THE STATE. • 1-800-HELP-FLA (435-7352)

100% of the proceeds for all fund raising events and ticket sales support local student scholarships and school grants for art and music programs and much needed art and music supplies.